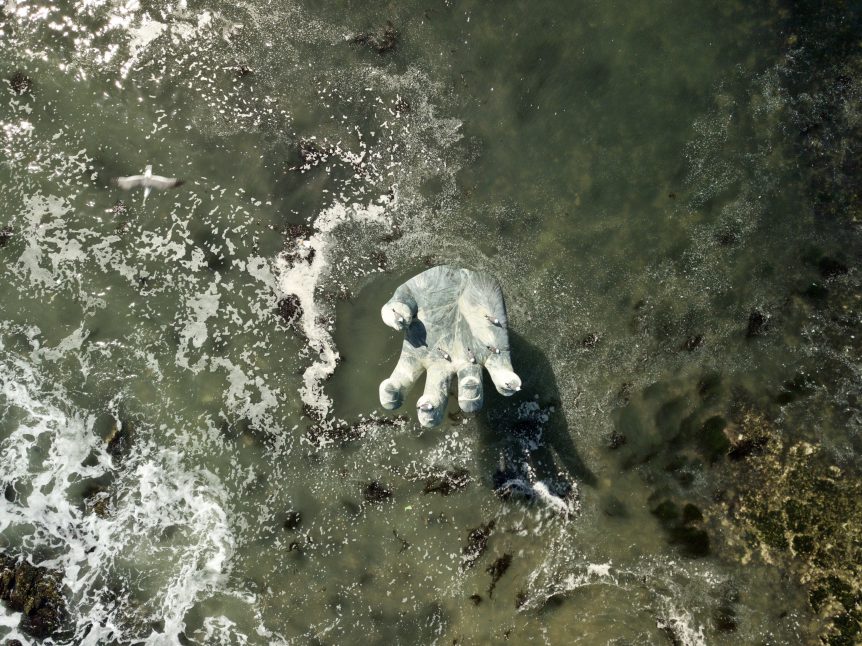 “Eh, there’s a hand coming out of the water!” Brian stated with a puzzled look.  Obviously, he does not watch  Korean dramas, therefore, he is not familiar with the area we were visiting today, while I on the other hand, was eager to unleash my extensive knowledge of all things Homigott. As a matter of fact, it was on my “must do” list for our South Korea trip.  I have been fascinated with the hand sticking out of the water location for some time, and could not wait to be there in person someday.

The location is well-known by tourists all over the world, as well as locals because on New Year’s Eve, thousands of people gather in Homigott Square to watch the sunrise together.  There are actually two large hand sculptures opposite to each other.  One comes out of the water, while the other is on land.  And right when the sun is rising, you can see it move for one hand to the other in a spectacular array of light and awesomeness.  Afterwards, people enjoy a homemade soup with rice cakes prepared in a huge pot at the square.

Our guides for the day told us that during the New Year’s celebration, there is music playing, vendors selling delicacies, souvenirs, and lots of people getting to know each other and enjoying each other’s company.  It is a beautiful place with a beach boasting huge waves, with crystalline waters, a light house, a museum, a souvenir shop, and plenty of coffee shops and seafood restaurants all around.  I felt like a child getting a wish granted on her birthday! It was a dream for me to come see this place and it did not disappoint! Unfortunately, we were arrive after sunrise, and were not able to experience the rising of the sun over the hands.  The weather was chilly and windy, but the sights were enjoyably beautiful with a perfect hint of serenity.  When the waves and the birds are the loudest sound you hear, you know you are in a special place.

On this particular day, we were meeting several of the professors’ wives from Handong University.  They took us to the museum, souvenir shop, and later to a cafe where we had delicious coffee and sandwiches.  Our time together at the cafe was special to say the least.  I shared our story, they asked questions, and once again, I felt the same as I did when I met the professors for dinner the night before (I shared about this dinner engagement on last week’s post).

There was a special connection to these ladies, which I cannot explain but to say that they exhibit the fruit of the spirit.  We encouraged each other, laughed a lot, and truly enjoyed each other’s company. I felt as if we were childhood friends reconnecting after some time.  They were precious and kind, and genuine servant leaders, who meet weekly to pray and fellowship.  True story: taking these photos together was challenging and hilarious.  My new friends were so excited to be photograph by a drone that they were unable to pose.  Needless to say, we had to do several takes!

Following our lunch, the ladies took us to a nearby Japanese Fisherman’s village.  This village was in an old site, built by a Japanese fisherman, during the Japanese colonization.  It had straight lines and designs typical of Japanese architecture, and the special paper panels typical of old Japanese houses.  I discovered some of the background history about the colonization, the war, and how that part of history has affected much of the current interactions between both cultures-more specifically with each government.  It became evident to me that much healing still needs to take place for both cultures.  This brought to my mind many instances in the scriptures where cultures would clash and collide because of different views, or because of the perils of war.  Someone once said, “no one wins in a war.”  I think that is a true statement.  Both fighting parties suffer loses, frustration, disappointment, lives, and rights. Who wins in the end?  The party with the biggest army?  The one with the better strategy? Not really. I’m afraid in the end, everyone loses.

Brian and I used to host exchange students in our home several years ago.  One year we had a young German boy, whom we love dearly.  Still today, we consider him part of our family.  I remember he would play video games with my boys, and one of his favorite games was a war game called Call of Duty.  In this specific game the Unites States battle against the Germans during the Nazi era.  They come to a small village significant because of a water dam that ran through the heart of the German town.  In the game, much like in real life, the village is attacked and destroyed.  The ironic thing about this story is that my precious boy was German, and the village he was destroying in this game was his own grandmother’s village, where she lost many relatives and friends. I remember him telling us how his grandmother would recognize the pictures in the game that were so similar to her village, and she would get very upset about him playing this game.  Of course, to him it was just a fun game.

War is ugly, and then you have the memories; the aftermath you have to live with.  I realize that most of the young people do not get that.  They don’t understand because they don’t remember.  Standing there at this fishing village, I could sense the hurt, and quietly, I said a prayer for God to bring healing to those who remember still, the horrors of the war, what was lost, and what is left of such a pivotal time in history.  We left after having such an enriched day of sightseeing, meditating, and fellowship. The ladies who spent the day with us, took such great care of us, attending to our every need. What lovely time we had! I learned a lot, and felt grateful for another wonderful day.

Thank you for joining me today.  Come back for the next blogpost on my South Korean vacation: Wearing Hanbok and Feeling Like Royalty!