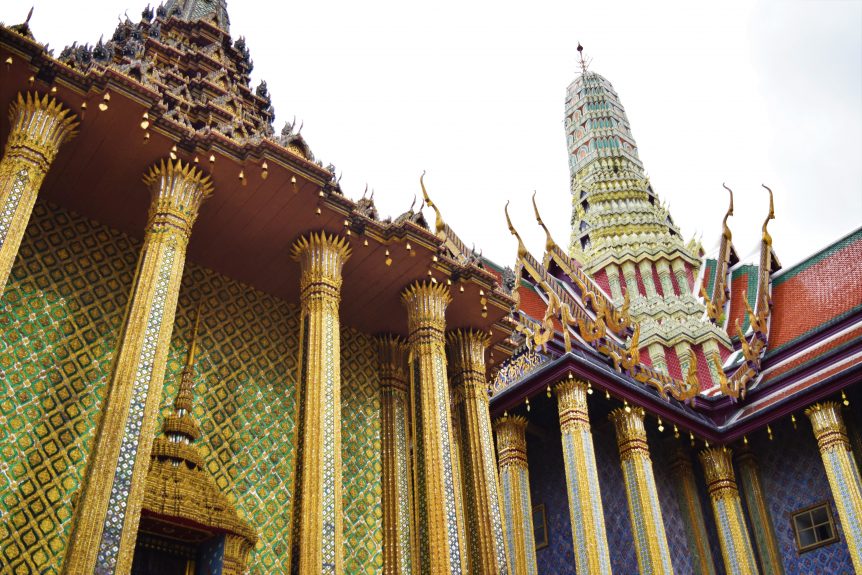 On my recent trip to Thailand, I visited the The Grand Palace in Bangkok. And let me tell you, to say I was impressed – and visually overwhelmed – would be an understatement!

While exploring the grounds, I turned to my Thai daughter Minky and exclaimed, “Thailand is rich!” She laughed and quickly stated, “What do you mean? It is a poor country!” to which I incredulously responded, “But Minky, look at all the gold all over the palace and temple!” She laughed again and then said, “But mom, that gold cannot be touched because it belongs to the king, and people are very religious in Thailand. So, all that gold in the temples, they would never touch it.”

The Grand Palace and its temple were splendid and elaborate by all means. Its many buildings were topped with and covered in gold; the structures adorned with precious stones and jewels, elaborate tapestries, more gold, exquisite murals, several statues of Buddha and royal guardians, and did I mentioned gold? There’s also a specific dress code to follow when you visit the palace, and for those who are not aware, there are vendors outside the palace selling “appropriate” clothes (mostly long and conservative) to wear in order to enter the grounds.

When you are in Thailand, one of the things you will notice immediately is how religious the people are. In Bangkok alone, there are over 400 temples! I was taken to the Temple of the Emerald Buddha, which is the highlight of the tour for locals and for visitors alike. There were many international tourists, and the Jade Buddha seemed to be what everyone wanted to see most. Photos aren’t allowed in the temple, but you can click on the link provided to view the Jade Buddha from an official site.

I learned a lot by walking around The Grand palace. One thing that kept coming to my mind while being a total tourist was that God, the Creator, has the upper hand when it comes to natural beauty. Not only has He created the most beautiful landscapes all over the world, but He has also gifted man with knowledge and creativity to build things of his own for the enjoyment of many. I have seen stunning things created by people armed with love and passion for what they believe in. I have also seen beautiful structures and masterpieces created by people with physical and developmental disabilities as well as people suffering from persecution, slavery, discrimination, and even terminal illness.

What I take away from my visit to The Grand Palace, is that anyone armed with creativity can be the producer, architect, or designer of a timeless, awe-inspiring thing that people will cherish for centuries and line up for hours just to get a glimpse of. Why? Because someone dared to do it.

Was there a time in your life when you dared to use your gifting or talent? In what way? What is your takeaway from that experience?