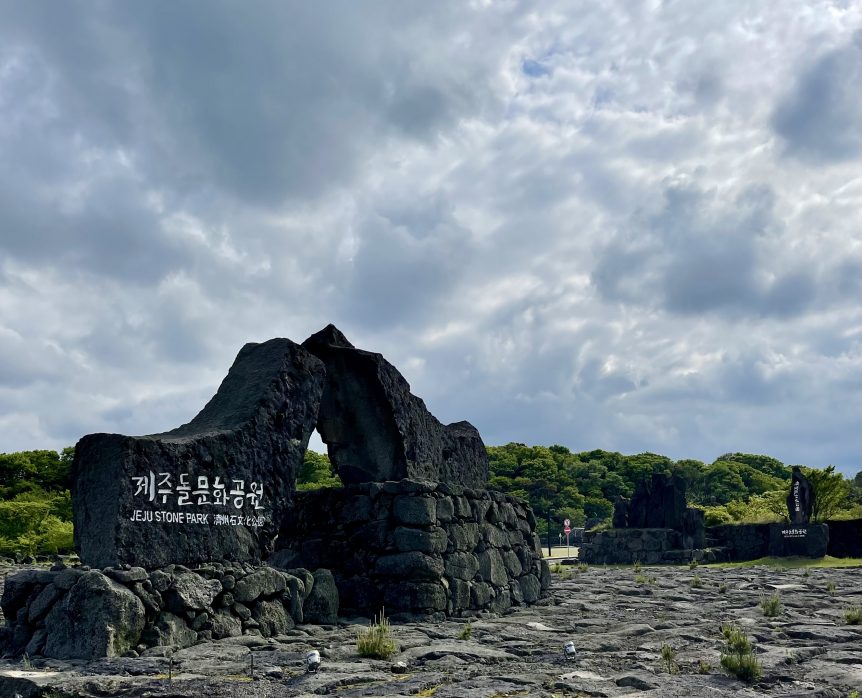 During my visits to South Korea, I have found that many of the culture’s behaviors and beliefs seem to be motivated by legends, folklore, and superstitions, as well as historical events passed down from generation to generation. I have walked through several ancient traditional villages where tall tales and real stories of the past still linger, unwilling to be tucked away or forgotten – each one possessing its own unique color and mood.

Today, I visited Jeju Stone Park, which I found fascinating and simply beautiful! According to the Imagine Your Korea website, Jeju Stone Park was established to celebrate Jeju’s history and culture. It states, “The main theme focuses on the foundation and identity of Jeju Island, based on the myth of Seolmundae Halmang (Grandmother Seolmundae), who created Jeju Island and the stones of Obaek Janggun (Five Hundred Generals). The park serves as a historical and cultural space where collected stones represent Jeju’s foundation and culture.”

Today’s visit to this park was perhaps one of the most culturally telling experiences I have encountered in regard to how the people of Jeju-do lived. Walking through the old traditional village was like walking through a passage into a different time. Here you find rustic traditional houses with their signature fencing/gate system. Albeit simple, it marvels me with its originality. Since their houses had no separate main gates, they would use three wooden poles laid across at the location of the stone gate with three holes to hold them in place. There was no fear of robbers because everyone knew each other and respected each other’s property and belongings. A true testament to a culture of honor! Here’s how the gate system worked:

In the village, there is a tomb uniquely constructed to honor a local teacher. I have included a photo below to show the care the villagers took in making sure people knew a scholar was buried there. They built a stone statue to resemble a teacher, and a smaller stone statue of a child kneeling before the teacher. There is an ink stone placed in front of the tomb to signify the teacher’s burial site. This shows me the value they placed on education back then, which still remains as a strong part of the culture today.

The only sign of modernism at the park is a museum and a cafe surrounded by three circular shallow pools equipped with rain boots for those who wish to take a cool walk in them. On this particular day, the air was crisp and the sun was shinning brightly. It was splendid!

As I explored the surroundings, I found myself imagining children playing in the vast grassy fields while mothers and grandmothers prepared meals, and the men farmed the land (whenever they were not gone fighting a war). This was hard work with limited resources in a beautiful setting. Like anyone else, I truly enjoy today’s commodities, but sometimes I yearn for the simple life. Don’t you?