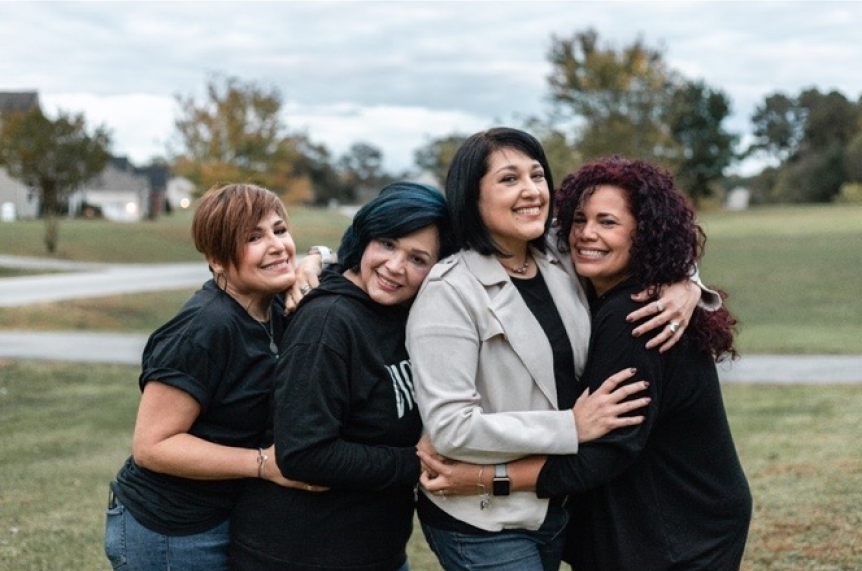 I have three sisters, and while growing up together in Puerto Rico, we shared a three bedroom house with only one bathroom. This was challenging as we grew into our teen years because, obviously, privacy was an issue, but the biggest issue was the bathroom usage. We would often fight each other to get some extra time for fixing our hair, showering, etc. Males have it easy because their physical care is not as extensive and involved as that of females (unless they are in the entertainment business or simply a beautiful man who loves beauty products — they do exist!).

Though we would bicker over the bathroom, my sisters and I also share many fond memories of those simpler times together. When we were young girls, we would play games out in the street with our friends. We would run around pineapple fields and eat the fallen mangos we found laying under neighborhood trees, as well as bananas and quenepas (Spanish lime). We often had scrapes, cuts, and bruises from playing rough and just from being tomboys. Don’t get me wrong, we also liked dolls, played dress-up, and watched telenovelas, but climbing on tress, gates, walls, and fences was definitely our thing!

We were born in a different time where cell phones didn’t exist and watching TV was a thing we would do on weekends — mostly for cartoons and sometimes for watching telenovelas. It was a time when we walked everywhere no matter how far, and enjoyed talking and playing together rather than going to parties or big events. We would play one of our favorite games on Saturday mornings. The three older sisters would get under a thick blanket while our youngest sister would wear our mother’s clothes and heels. She would act as the mother who was coming back from work, and was going to punish her daughters after discovering they didn’t clean the house while she was away (not far from real life). She would often use her chancla or a belt because that is how children were corrected “back in the day.” She was ruthless, which explains why we all huddled together under the thick blanket. Ah, those were the days…

Life was like that when we were growing up – fun and lighthearted – but it was not absent of struggles and dangers. We just handled things differently than today. Somehow, all that climbing, playing, talking, and walking helped us become tight and tenacious. Through the years, my sisters and I have learned to be our biggest support group. We are always there for each other, and we help carry each other’s burdens. I am grateful for many people in my life and for the beautiful memories I have with them. But by far, a lifetime with my sisters is one of the most precious gifts I have been given, and it is one which I value dearly.

I understand that it is not like that for everyone who reads my blogposts. Maybe you come from a dysfunctional home or have become distant with your siblings. Today, as I reminisce about my beautiful sisters, I want to encourage you to reach out, to forgive, and to begin something new with your siblings. Perhaps things will never be what you had hoped for. Nevertheless, it could end up being something special and beautiful. Today, I encourage you to make beautiful memories with those siblings who are still living, and if you have no brothers or sisters, then find a close relative or a friend that is “closer than a brother”, and do something unique that will help you grow closer. Life is short, but the love of family goes beyond the grave.